13:31 He put before them another parable: “The kingdom of heaven is like a mustard seed that someone took and sowed in his field;

13:32 it is the smallest of all the seeds, but when it has grown it is the greatest of shrubs and becomes a tree, so that the birds of the air come and make nests in its branches.”

13:33 He told them another parable: “The kingdom of heaven is like yeast that a woman took and mixed in with three measures of flour until all of it was leavened.”

13:44 “The kingdom of heaven is like treasure hidden in a field, which someone found and hid; then in his joy he goes and sells all that he has and buys that field.

13:45 “Again, the kingdom of heaven is like a merchant in search of fine pearls;

13:46 on finding one pearl of great value, he went and sold all that he had and bought it.

13:47 “Again, the kingdom of heaven is like a net that was thrown into the sea and caught fish of every kind;

13:48 when it was full, they drew it ashore, sat down, and put the good into baskets but threw out the bad…

13:49 So it will be at the end of the age. The angels will come out and separate the evil from the righteous

13:50 and throw them into the furnace of fire, where there will be weeping and gnashing of teeth.

13:52 And he said to them, “Therefore every scribe who has been trained for the kingdom of heaven is like the master of a household who brings out of his treasure what is new and what is old.”

8:35 Who will separate us from the love of Christ? Will hardship, or distress, or persecution, or famine, or nakedness, or peril, or sword?

8:36 As it is written, “For your sake we are being killed all day long; we are accounted as sheep to be slaughtered.”

8:37 No, in all these things we are more than conquerors through him who loved us.

8:38 For I am convinced that neither death, nor life, nor angels, nor rulers, nor things present, nor things to come, nor powers,

8:39 nor height, nor depth, nor anything else in all creation, will be able to separate us from the love of God in Christ Jesus our Lord.

Sermon: We Belong Together (Thanks Pat Benatar) aka Let Love Be Messy

Picking up where Heather left off last week, we’re looking at another set of parables that Jesus told to his audience and his disciples. Parables aren’t meant to have one singular meaning but can have many meanings and interpretations. Which makes things a little easier but also feels like Jesus is using some sort of secret code and is leaving it up to us to decipher it.

That being said, there can be many truths found in the parables not just one moral to the whole story. Father Richard Rohr is known for saying that God is in everything. Many indigenous people believe similarly that God can be found in nature, in water, in the Earth, and all around us.

For example, if we take this just a little literally, I’m curious how many of you have seen a mustard seed? Jesus refers to it as the “smallest of the seeds.”

The Message translation of this passage refers to the seed as a pine nut:

“God’s kingdom is like a pine nut that a farmer plants. It is quite small as seeds go, but in the course of years it grows into a huge pine tree, and eagles build nests in it.”

The closest comparison I have to this is bonsai seeds. Recently, I planted some seeds that are meant to grow into tiny trees. Bonsai is Japanese for tray planting and is an art form in Japan and China. The seeds don’t necessarily grow into small trees on their own–they have to be cultivated this way. When planted in the right containers and the right environment, these trees, though small, are just as beautiful.

Next, let’s talk about yeast. Yeast is actually a microorganism. It’s also considered a fungus and does some really cool stuff. I guess you could call it small but mighty. Most of us are familiar with it as a way to make bread dough rise, it’s used in starters for bread, and it’s pretty important in making Beer and other alcoholic beverages.

In case anyone’s wondering how I’ve been spending my time during Covid, it hasn’t been through baking bread (YET) but I have learned some pretty cool things about yeast. For instance, did you know you can make your own yeast? Well, not quite like that, I guess.

One article I read about the sourdough craze notes: “What you’ll actually be doing is capturing wild yeast and bacteria that’s already present in the air or in the flour to make a “sourdough starter.” This is what bakers have relied on for generations before commercial yeast became available less than 100 years ago.”

Rev. Melissa Florer-Bixler, pastor of Raleigh Mennonite Church writes about these parables by describing the world Jesus’ audience is living in:

“The world of the disciples is one of domination and violence. Their world is one in which the wealthy and powerful rule over the weak, take advantage of that weakness, crush it under the boot, and lash it with the whip. It is a world in which Caesar is both king and god, a cruel, irrational tyrant who takes vengeance against his enemies.”

So, instead of referring to the “kingdom” theologians like Asa Maria Isasi-Diaz, mother of mujerista theology, have offered up kin-dom as an alternative.

Melissa adds, “Kin-dom became the language she used to describe God’s libertad, the liberation of God at work among people, the good news for those who suffer at the hands of kings. Isasi-Díaz dedicated her life to the work of mujerista theology, where the center of theological study is borne from the experience of Latinas…Liberation is found not in hope deferred to another world, to life after death, but what can be created now.”

So, if the kin-dom is liberating and God is all around us, I’d like to offer up this interpretation of the parables we’ve read:

Ultimately, it seems Jesus is comparing the “kingdom of heaven” (referred to henceforth as kin-dom) to seemingly insignificant things that can become hard to miss. You may not notice mustard seed. Or yeast. But, you do notice what they produce. It’s hard to miss trees! Or bread–especially when it’s baking. The smell permeates everything. Jesus tells us in agricultural and baking terms what the kin-dom looks like.

The kin-dom looks like finding priceless treasure, like catching so much fish that you have more than enough to provide for everyone’s needs.

The kin-dom of heaven is here on earth right now.

The kin-dom of heaven looks like going to the local Mcdonald’s early in the morning when the queer latinx worker greets you and has a full face of make-up and beautiful nails. Which is to say, the kin-dom of God is queer as hell.

The kin-dom of heaven seeks justice for Black and Indigenous people of color and sees the beauty in diversity.

The kin-dom of heaven sees disabled people and their need for accessibility and gives it to them.

The kin-dom of God looks like everyone has enough. Enough food, enough money, enough love. Everyone is taken care of.

The kin-dom of God looks like wearing a mask in public to prevent the spread of a pandemic that is disproportionately affecting the elderly, disabled, people of color, and the poor.

The kin-dom of God looks like White people marching in solidarity with Black and brown people for equality, ending systemic racism and police brutality, and abolishing prisons and systems that are destroying them.

Finally, I strongly believe the kin-dom of God–the kin-dom of heaven–looks like Love. Not a love that excuses bad behavior or a love that’s superficial. But Love that is radical, affirming, solidarity with our neighbors. Love that changes and shapes the world as we know it. Amen.

Wild and sincere and deliberate

Love can be more chaos than order.

Love can be tension.

Love can be conflict.

Love is hard work and so easy.

Love is an ever-unfolding thing

We are all still figuring out.

“I may not live to see our glory, but I will gladly join the fight…Raise a glass to freedom, something they can never take away, no matter what they tell you.” ~ The Story of Tonight, Hamilton

No one should have to be made a martyr for others to obtain justice.

And Elijah McClain. An autistic Black kid with a running mask on, was tackled and then drugged by police and later died.

His life is gone too soon in a similar fashion. “I can’t breathe.”

Breonna Taylor, in her home, asleep. Was shot eight times when police stormed her house (the WRONG house) without announcing themselves. She was shot. Eight. Times. By police who have yet to be brought to justice. You can sign the petition here.

Centuries of trauma in that one phrase. Government endorsed murder.

Simply because you exist. Because your existence poses a threat and someone else has the power to take that existence away from you?

When I was a child, I had an older male cousin who enjoyed dunking my head underwater while we played in the pool. Once, he held my head down until I came up, gasping for breath. This same cousin was known for exerting his male dominance over my younger sisters and was the closest thing to a bully I can remember. I had the bruises to prove it.

Another memory I have is of my father holding my head under water while we were “playing” in the pool. Again, I came up gasping for breathe as my father held a perverse grin on his face. Both of these stories involve men/boys exerting their power over myself and others they perceived as weaker or Other. It wasn’t the last time.

If you want to know why protests are still happening, why we are screaming about abolishing the police and prisons, it’s because of this.

Not until the world looks drastically different than it does now. Not until we see that a different world is possible and we fight like hell together, in solidarity with one another for it.

P.S. Shana Tucker, a musician friend of mine wrote this Requiem for Elijah McClain that I can’t stop thinking about. 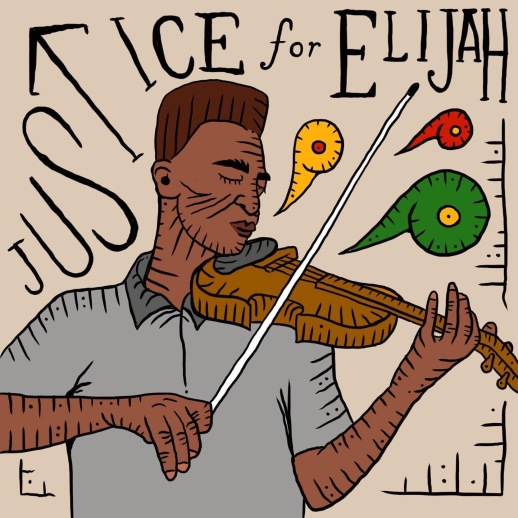